Every traveler must have already stumbled upon the saying that “It’s not about the destination, it’s the journey that matters.” True enough, the temples, beaches, mountains, sunsets, and hotels take our breath away but it’s the people we meet, the highs and lows, getting lost, the local food, and everything in between that are the most memorable. But if we take this quite literally, getting around a country or the city is as exciting as well. In the Philippines, commuting through towns, in cities, and across seas is an adventure in itself. Ready for the ride?

The Philippines is an archipelagic country consisting of 7,107 islands. And since it is not connected by land with any other country in Southeast Asia, it is usually not included in the backpacking trail. One must fly to the capital Manila or key cities like Cebu, Kalibo, Iloilo, and Davao to finally enter the country. You can choose among the flag carrier Philippine Airlines, the budget airline Cebu Pacific Air, and the low-cost carrier Air Asia for flights around but Cebu Pacific is known for its low fares and seat sales so you better keep an eye out!

There are big ferries crossing through islands and different big destinations around the entire country. The fares are most likely cheaper than airplanes but time is the enemy. What could be a 1-hour flight to an island becomes a 10 to 12-hour cruising in the vast ocean. But if you’re not in the rush and would want to take it slowly but surely, ferry rides are enjoyable and scenic.

The Philippines has got some of the most beautiful islands in the world, some even voted the best for many years now like Palawan, Boracay, and Cebu. Island hopping in these destinations is best done by riding the banca, a double-outrigger canoe. Prepare to get a little dizzy as big waves can rock these boats but these rides are definitely a thrill. Otherwise, sit on the edge or on the sides, hang your feet enough to touch the water, and chill the day away.

You’ve reached the skies and rode the waves, now it’s time to hit the road. Without a doubt, the most popular among all vehicles and mode of public transportation in the Philippines would have to be the jeepneys. They are kings of the road. They are sometimes metallic but mostly colorful. They are loud, furious, and jampacked. Jeepneys are actually U.S. Military Jeeps left over from the World War 2. In major cities, jeepneys ply several routes, taking people from narrow residential streets to the major landmarks and big roads.

But in the province, especially in the north, jeepneys are a great way to not just get to a destination but also see a better view of the place. It has become popular for foreigners and local tourists alike to ride on top of the jeepney, or what is called toploading, with the intention of taking the scenic views in their full glory.

Toploading is definitely frightening but the views are nothing short of breathtaking. Tip: Say “Para po” when you have reached your landmark and need to get down. Don’t forget to pass your coins/payment to the other passengers all the way to the driver!

Longer trips from city to city or even to other regions can be done by riding the bus. In Manila, they also ply major roads and landmarks. In the provinces, they take passengers from one town to another especially when they have a lot of things to bring like sacks of rice, baskets of vegetables and goods, and huge luggage. 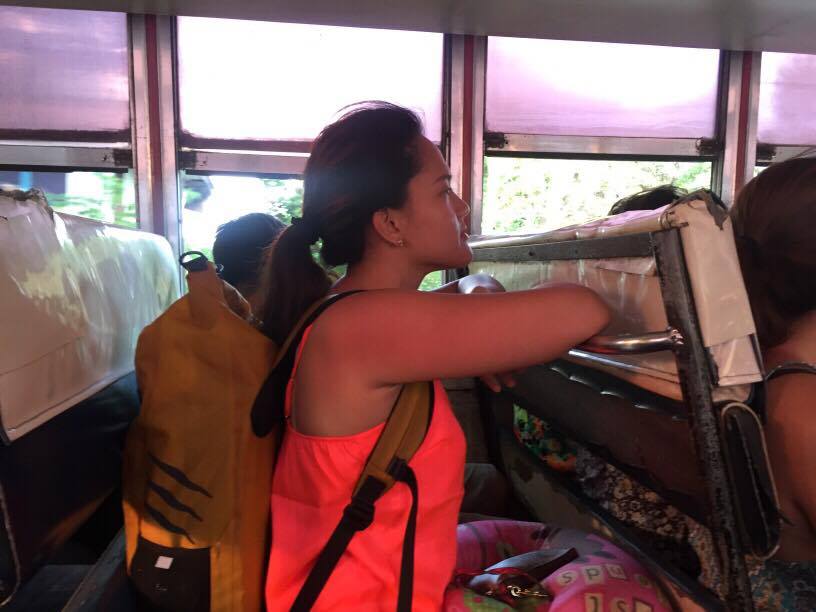 Try riding the deluxe ones (no aircondition) and bask in the cool breeze of fresh provincial air.

Other ways of commuting around cities and provinces, especially in tighter alleys, would be the tricycles. They are the Philippines’ version of Thailand’s famous tuktuk.

They are fast and the ride is breezy at the least. For a more enjoyable and thrilling experience, make sure to take the seat right behind the driver and hold on for your life really good!

Probably the cheapest way to commute, although only covering short distances, would be the trisikad or a cycle rickshaw. It could take awhile, so walking to your destination might end to be a better choice!

Most often than not, the best moments in a new place come in the challenge experienced through commuting by local transportation. Cabs and Uber are definitely comfortable but taking the transportation that most locals do will give a much more authentic experience. So when you’re in the Philippines, don’t miss out on trying out to commute around, because it is definitely done with much more fun here!

P.S. If you want to take it as authentic as you can, these four-legged friends in the fields can give a truly unique experience!

*Special thanks to all those who contributed their fun commuting photos for this article!