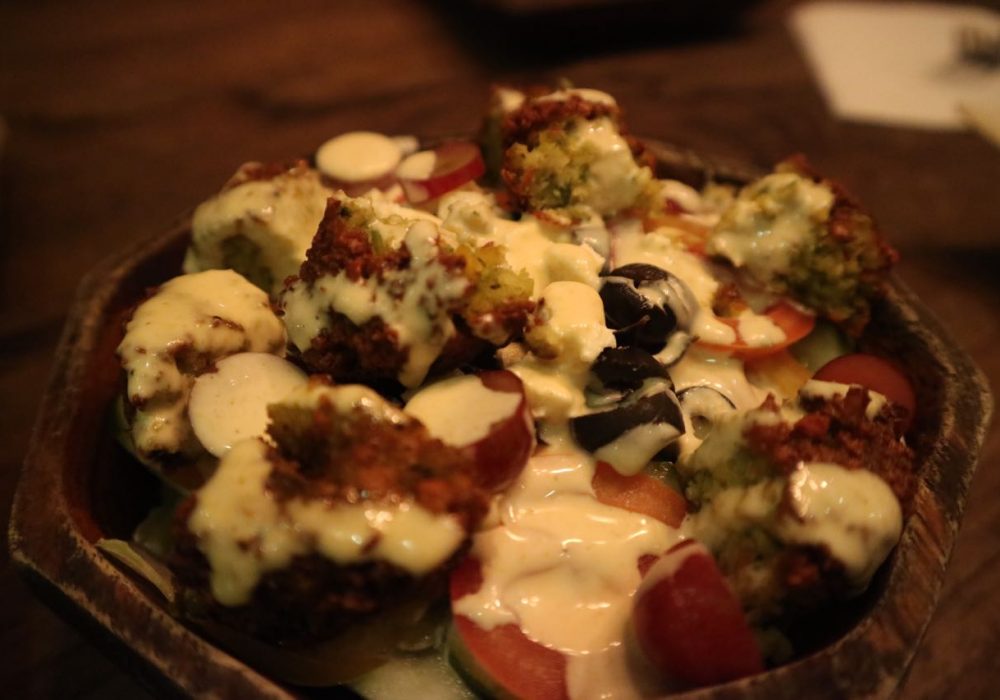 There’s something new popping up in the corners of Poblacion without us noticing it. And while we love going on a gastronomic adventure, there’s one place that’s not necessarily a newcomer in the neighborhood but worth giving a try or a second look: Kite Kebab Bar + Mediterranean Street Food.

The owner is a familiar face, having had a celebrity status for some years before he went full-on as a restaurateur. Kian Kazemi walks in subtly but with an air of confidence and approachability. When he sat down and started talking about the restaurant, his passion for food and culinary filled the room and got our tastebuds in the mood for some great food. Kian is half-Iranian and while his first venture Persia Grill pays homage to traditional heirloom Middle Eastern cuisine, Kite Kebab Bar is where he gets more creative and true to his style.

While waiting for food, Kian lets us try their own specialty drink Kite Beer, an interesting mix of Kombucha (fermented tea) and beer, which he fondly says will detoxify and intoxicate you at the same time. 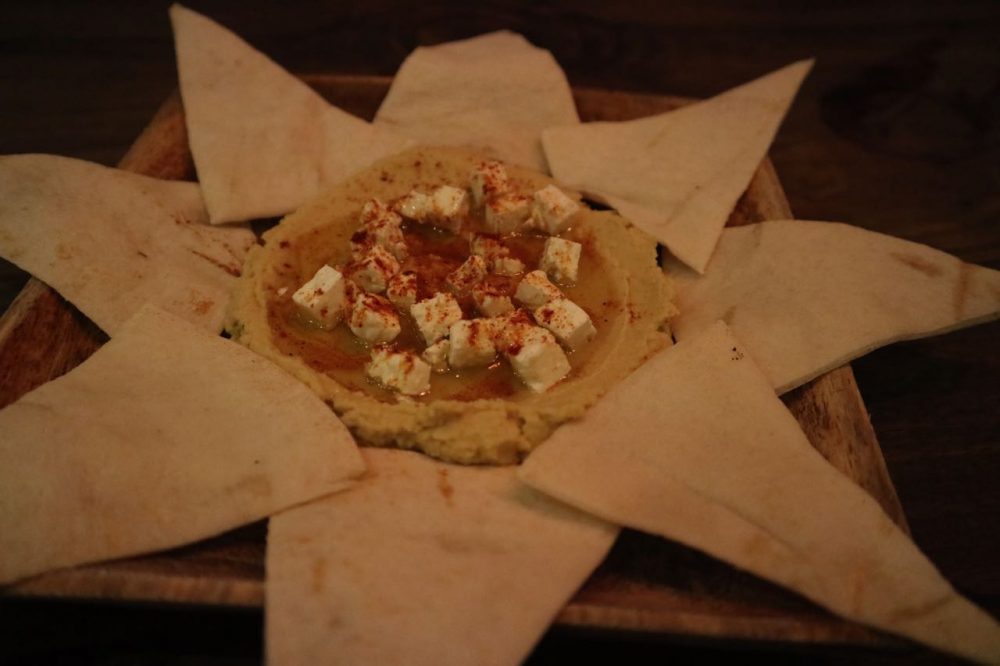 We started off with Hummus and Feta Cheese with homemade pita slices. The cheese added a tangy kick to the dish without losing the real Persian flavor of the peas. 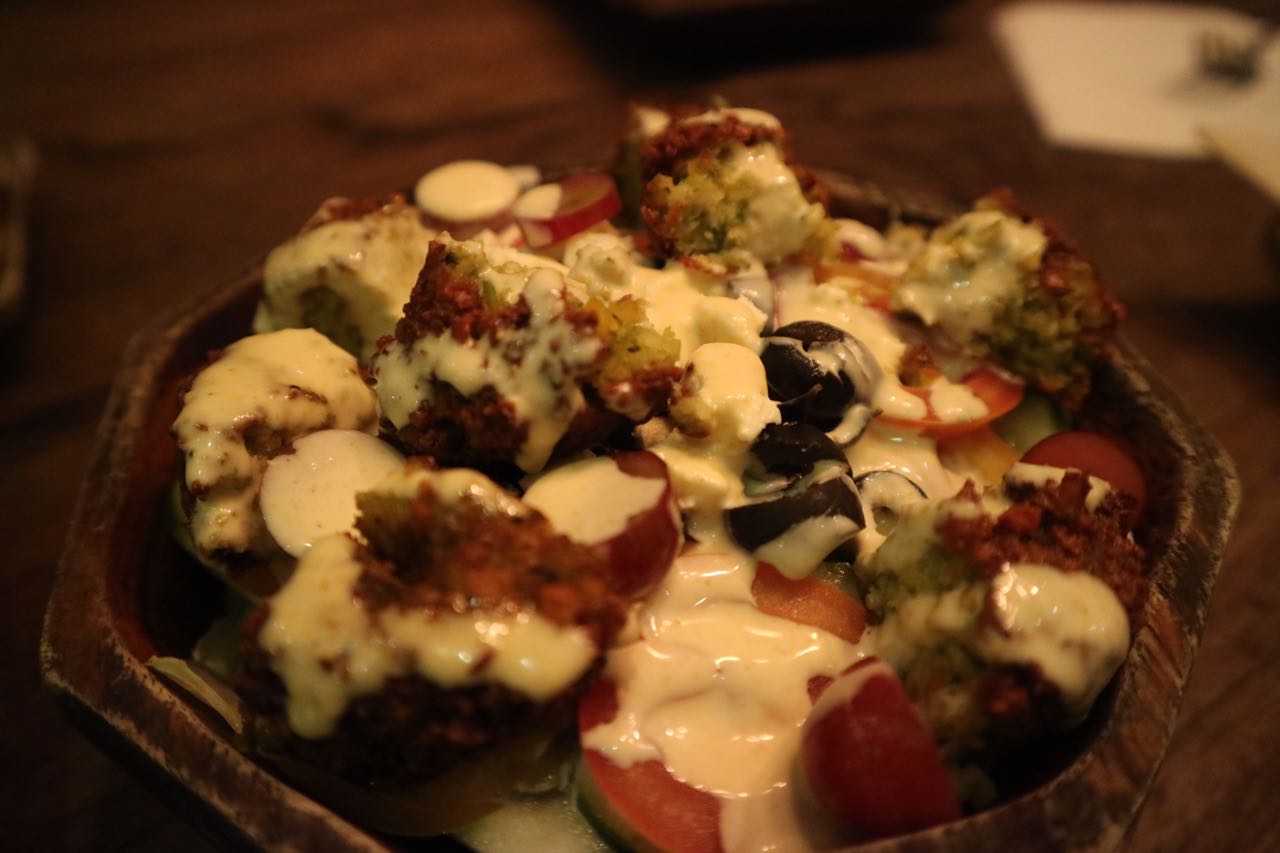 The Falafel Salad was a medley of flavors and textures: deep fried crunchy falafel on a bed of lettuce, sweet grapes, olives, tomatoes, and feta cheese. 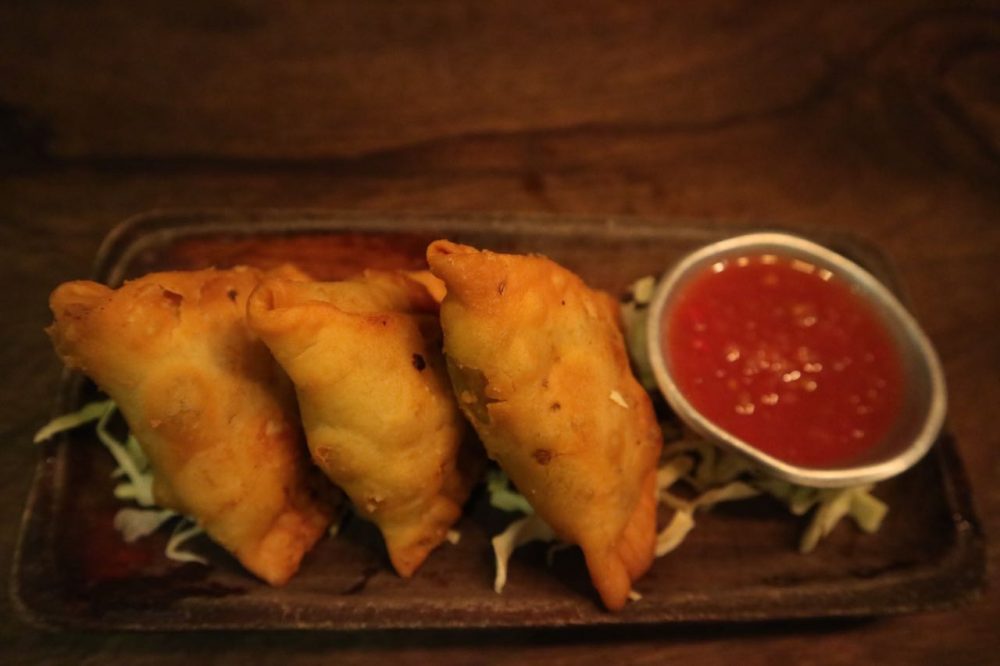 Another winner appetizer was the Vegetable Samosas which had really crispy pastry and a burst of flavors inside. It came perfectly with tomato salsa on the side. 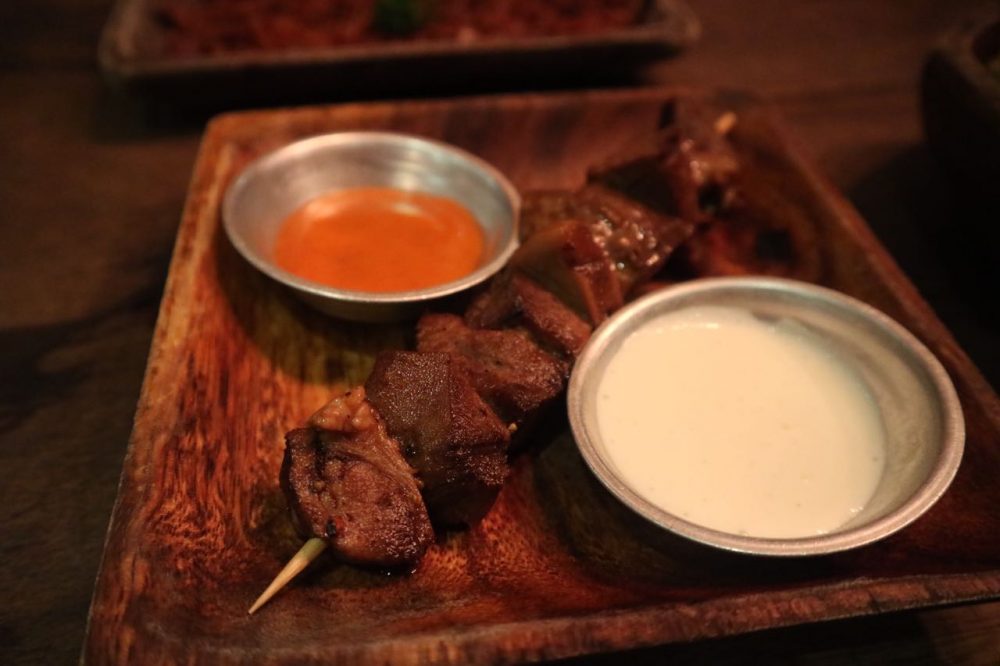 The biggest revelation of the night would have to be the Ox Tongue Skewer. Boiled until perfectly tender and soft, the ox tongue was then grilled to give off that smoky flavor. 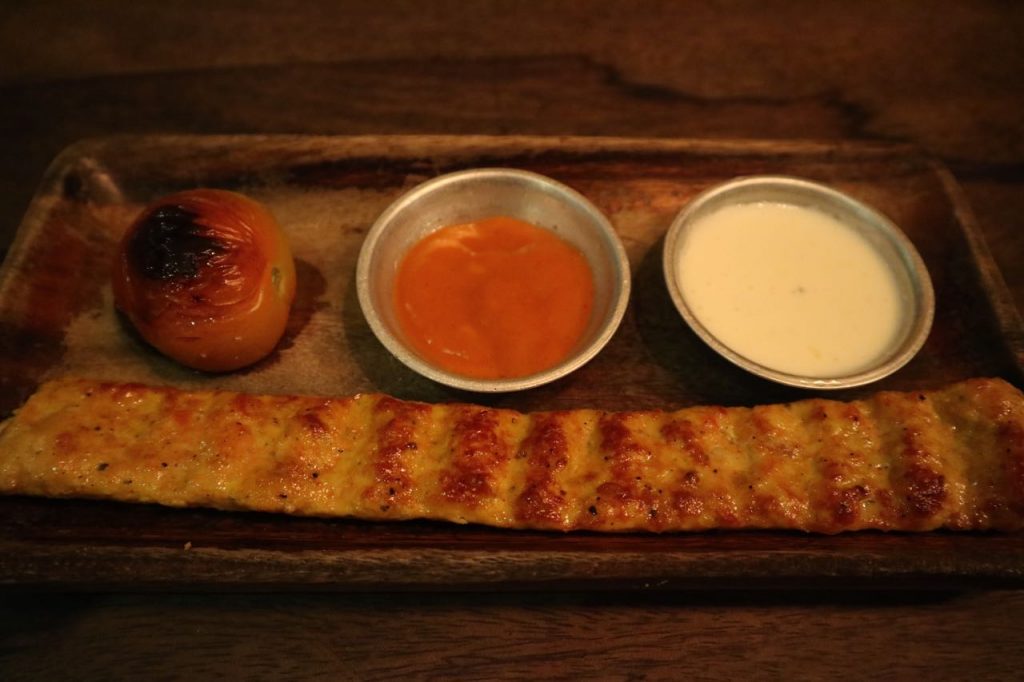 Kebab after kebab soon filled our table (and eventually our stomachs) and they are grilled on point. Even the grilled tomato on the side was done so right. 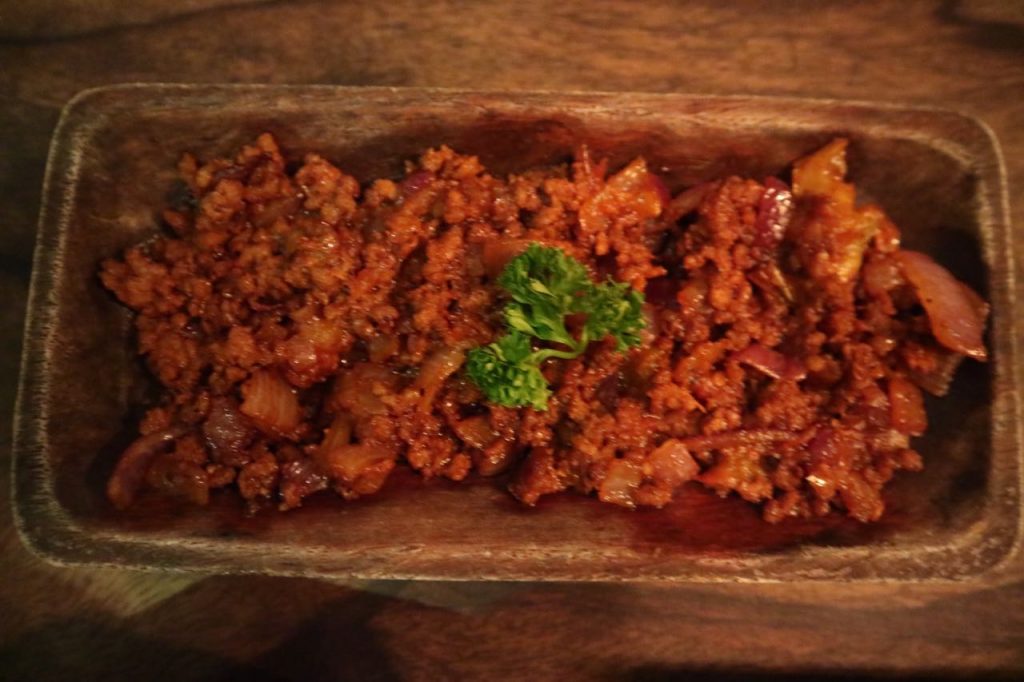 If you want to spice your dining up a bit, order the Keema — should go well with a cup of hot Basmati rice. 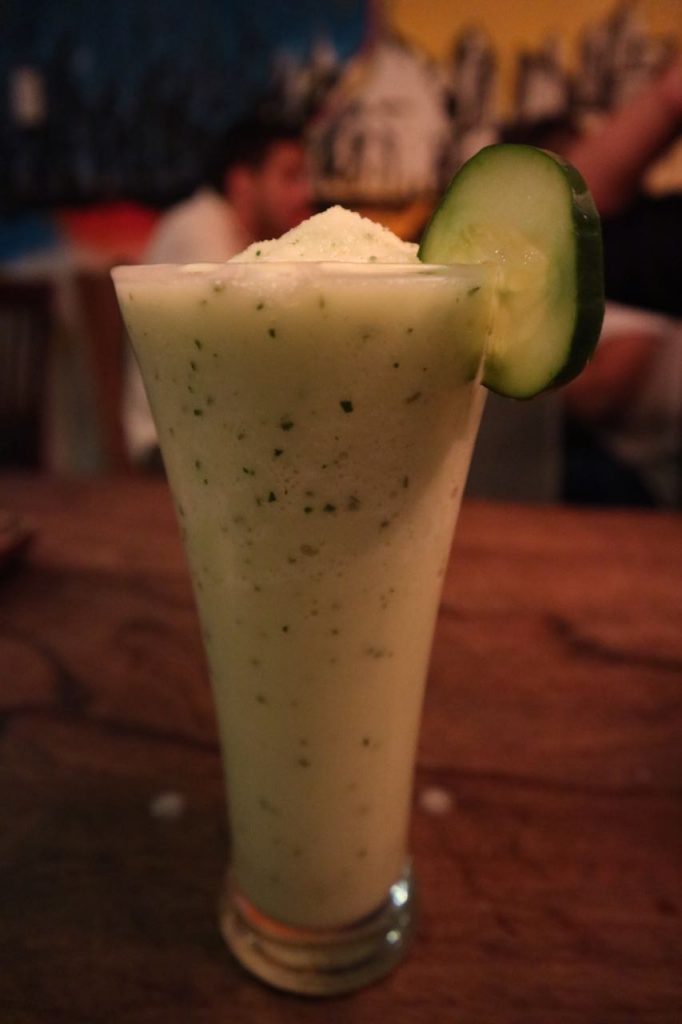 What better way to balance out the smorgasbord of flavors and spices than a refreshing Cucumber Yogurt Shake — and Kian’s inspiring literary references. “It’s called Kite because it symbolizes how I am going against the wind — and that’s the only way the Kite will continue flying and won’t fall down. This is my personal, creative take on Persian food.”

Aside from the food, Kian also managed to put together a place that looks somewhere between eclectic and homey all from his imagination and pieces of furniture, trinkets, and installations from his past home and restaurants. Kite Kebab Bar is literally an extension of someone’s home in the neighborhood (the wall is next to the house owner’s garage). But most importantly, it’s an extension of one’s self — inspired by a heritage cuisine with a lovely, personal touch.